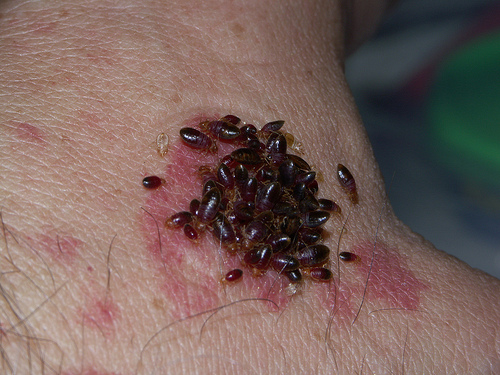 As with many things, the full answer is a little more complicated than that.

Ultimately, we can’t be certain as yet: studies are being conducted on bed bugs from populations that have recently adapted to so many of our modern industrial pesticides, and human blood-borne diseases are even more adaptable than the bed bugs themselves. Bed bugs are not known to pose a threat to human health, not yet, but as many as 30 or more human blood-borne pathogens survive after being ingested by these parasitic, blood-sucking insects.

Here are some facts we know about bed bugs, in terms of actual risks to human health:

Are Bed Bugs Dangerous to Humans?

Over the last 3-4 years, experts have begun to explore the fact that bed bugs carry infectious human diseases, by dint of their preferred sustenance: the organisms which give rise to HIV, herpes, every form of hepatitis, MRSA, and other blood pathogens have been found to have survived the feeding process.

With no known cases of bed bugs transmitting these diseases from one person to another, scientists are looking into why that is, given that the microorganisms are already adapted to infect humans. No definitive answer has been provided yet.

Another point of concern are the arboviruses. These are diseases, such as the Zika virus, malaria, dengue, and yellow fever, which are known to be transmitted primarily through the bites of mosquitoes, ticks, fleas, and other parasitic insects, arachnids, and arthropods. Here again, there are no recorded cases of these infections being transmitted by bed bugs—but the possibility remains, as the arboviruses are particularly prone to rapid adaptation.

Victims of bed bug bites usually experience itchy, sometimes painful rashes, which may also involve large and highly visible welts. In rare cases, the anaesthetic and anticoagulant in bed bug saliva can lead to an allergic reaction, resulting in a more severe range of problems. Because bed bugs are tiny and difficult to spot, particularly if they haven’t fed recently, these rashes are one of the earliest visible signs of a bed bug infestation.

Bed bugs grow to be approximately 4 mm in length and will be half to two-thirds as wide. Their young can be as little as half that size and will be a pale brown, white, or yellowish color. Adult bed bugs are red, reddish-brown, yellowish-brown, or dark brown. Both adults and nymphs will turn darker, and become large and sluggish after they have fed.

These unwanted houseguests inject a chemical, a modified saliva when they bite. This combines an anaesthetic, or painkiller, with an anticoagulant, which thins the blood and makes it less prone to clotting. The amount injected isn’t enough to cause serious harm to a person, although individuals with an existing heart or blood condition may be at some risk from large numbers of bites (studies aren’t clear on that point).

The reason for the anticoagulant is that bed bugs find the thinner blood easier to feed on, as well as to digest. Having eaten, bed bugs become sluggish, and will often spend some time remaining where they’re at to digest their meals.

Bed bugs will also defecate, breed, and lay eggs in the vicinity of a sleeping individual on whom they have just fed, unless there is some immediate threat to their safety. For this reason, another early sign of bed bug infestation is what they leave behind on the mattress: eggs, and egg husks, as well as tiny little black spots—bed bug offal—the size of the head of a pin.

A restless sleeper might roll over, inadvertently crushing bed bugs which have recently fed, leaving blood spots on their sheets and mattress which are often mistaken for their having bled after being fed upon. In fact, the anticoagulant is so mild as to wear off almost immediately after feeding has ended.

For more information on how to recognize bed bugs, what myths to ignore, and how to kill bed bugs, please consider the following links to other pages on this site. If you suspect you might have a bed bug problem, take action immediately—before their colony gets any bigger!

It really helped me when you said that victims of bedbug bites usually experience itchy, sometimes painful rashes, which may also involve large and highly visible welts. We just visited our Aunt yesterday, and one of my nephews have painful rashes when we got home. I’ll make to contact my Aunt and inform her about this for her to consider hiring a bed bug exterminators.