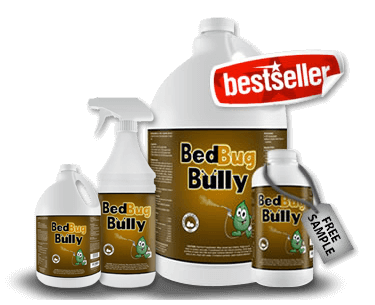 A Review of Bed Bug Bully for Consumers

Recently, the University of Kentucky partnered with the National Pest Management Agency – a non-profit organization established in 1933 – to conduct a Bugs Without Borders Survey. They found that bed bug infestations in the United States are continuing at a high rate and in fact showed signs of increase over the years. There are many factors which may act as contributing factors to this phenomenon including warmer climates and the elimination of the chemically strong pesticide, DDT, which was banned in 1972 for being unsafe for humans and pets.

This has led to several epidemics to date including the famous 2009 – 2010 Manhattan Bed Bug Epidemic. Today, bed bugs are present in every US State with over 99% of pest control professionals reporting bed bugs as a reason that they were called into a home, as seen in the Bugs Without Borders Survey referenced above.

Humans Fighting Back with the Bed Bug Bully Spray

However, the positive news is that this gap in the marketplace has led the charge for innovation in providing an environmentally friendly and safe for humans and pets pesticide solution. This green revolution saw the rise in a number of products that are designed with safety for small children and pets in mind while looking for creative ways to effectively eliminate a bed bug presence and prevent a potential infestation.

One product that has received consistent positive reviews on the market today is Bed Bug Bully – a naturally formulated product that targets the pheromone-reliant bed bugs pheromone receptors to ensure that these critters are either eliminated or evacuated within 34 seconds of application. Meanwhile, it is so clean that it has been approved by the Environmental Protection Agency (EPA) as being pesticide-exempt.

This natural formula featuring environmentally friendly and natural ingredients targets the bed bugs pheromone receptors to ensure that they evacuate your premise before laying up to 500 eggs. Bed Bug Bully does so by leveraging the fact that during bed bug mating rituals, the males excrete certain pheromones to attract mates and certain pheromones to arrest mates. Using natural ingredients that simulate the arresting features of bedbug pheromones, it is able to leverage bed bugs’ own self-defense mechanisms against itself and eliminate your home of a bed bug problem in the quickest and cleanest way possible.

There has many pesticides and insecticides developed to control the spread of bed bugs. There are several key strengths to bed bugs that enable them to be worthy opponents in the turf war of your home.

Specifically, bed bugs have these strengths:

Reactive to these strengths, researchers have, over the years, come up with a series of products effective at killing bed bugs. However, as expected, many of the strong chemical agents, while effective at getting rid of bed bugs, actually present harm to people especially small children and pets. The chemical DDT (dichlorodiphenyltrichloroethane) is colorless, crystalline, tasteless and almost odorless – it achieved fame for its insecticidal properties but was banned in 1972 by executive order for its acute and chronic toxicity.

Experts today recommend non-toxic pesticides and pesticide supplements for their effectiveness at driving bed bugs out from homes – eliminating potential health risks – while preventing the strong chemical composition from doing too much harm to host families and pets.

Finally, in the fight against bed bugs – the live and let live philosophy ultimately wins. The truth is, while bed bugs are annoying critters who poses both risks to your family and your home; their role in the delicate ecosystem that is our planet earth is a relatively unexplored topic. This is yet another reason for selecting non-toxic and natural ingredient based solutions to stopping infestations by insects such as bed bugs. During periods when chemically strong pesticides like DDT were used, the world saw a steady decline in bed bug population but a rise in so-called “superbugs” – insects that demonstrate traits of resisting chemical insecticides. This product not only seeks to destroy the bed bugs that have invaded in your home but promote the evacuation of bed bugs that were not in direct contact with its spray. This serves to allow the bed bug population to remain in balance in nature – just not inside your home.